FAQ/Backgrounder on the Issue and Constitutional Law

Find everything you need to know about the upcoming carbon pricing reference case here. Feel free to leave us questions below or contact us here.

1. What is the file number and full case name?

2. When and where is the court case being heard?

February 13-14, 2019, at the Saskatchewan Court of Appeal in Regina, Saskatchewan (map). The proceedings will be streamed live.

3. What is this case about and why is it going to court?

This is a reference case regarding the constitutionality of the federal government’s (FEDGOV) legislation called the Greenhouse Gas Pollution Pricing Act (GGPPA) (see question #4 for more information on the GGPPA). Constitutional cases typically try to answer one main question: does the government in question (in this case, the FEDGOV) have the legal authority to enact a piece of legislation?

This case is going to court because the Government of Saskatchewan (GOVSK) is challenging the GGPPA as being unconstitutional (otherwise known as “ultra vires“, which means “beyond the powers”).

The GOVSK is challenging the GGPPA through a “reference case” or “reference question”. Reference cases are not like the typical lawsuits that involve two litigating parties. Reference questions give governments the ability to ask courts important legal questions. The court’s determinations are not legally binding like a judgment or order in traditional litigation, but governments typically treat them with the same weight and will follow the court’s decisions.1

Other parties who have an interest in the issue can get involved by applying to be an “intervenor”. Intervenors can includes other governments, non-profit organizations, or corporations (see question #7 for the list of parties and intervenors).

Once the court reaches a decision at the Saskatchewan Court of Appeal, a party may still appeal to the Supreme Court of Canada.

4. What is the federal government's carbon pricing legislation at issue?

The FEDGOV has proposed the Greenhouse Gas Pollution Pricing Act (GGPPA), which sets out the legislative framework for what they called the “Backstop” in the Pan-Canadian Framework on Clean Growth and Climate Change and later detailed in their Technical Paper. The FEDGOV has issued further statements about how carbon pricing will work specifically in Saskatchewan.

The GGPPA applies to those provinces who did not have in place their own carbon pricing framework that met the federal standards by 2018. The basic carbon pricing plan for Saskatchewan as outlined in the GGPPA consists of two main parts:

The carbon pricing plan ensures that any revenue raised will return to the province of origin to provide relief to vulnerable sectors/individuals and families and as support for other greenhouse gas emission reduction strategies in the province.

View a set of infographics here to better understand carbon pricing and the federal legislation.

5. How does the court determine whether legislation is constitutional?

Each level of government has areas of powers designated to them called “heads of power”, which the Constitution Act, 1867 outlines in section 91 and 92.

Sections 91 and 92 define the boundaries within which governments can act (the “division of powers”). Legislation passed by either level of government may be unconstitutional if that law does not fall under any of the respective government’s heads of power. In other words, the government has acted without legal authority. These limitations prevent the provincial government from legislating over matters that the federal government has responsibility over and vice versa. Preserving this balance of powers is a pillar of constitutional law and our systems of government.

Constitutional analysis is a bit like a matching game in which the courts take the piece of legislation at issue and “match it” with one of the powers given to the enacting government by the Constitution Act, 1867. If the courts find an appropriate match, they deem the legislation constitutional.

The “matching” process is not usually this simple, however. The courts must first determine the “core” of the legislation (through the “pith and substance analysis”) and whether it is constitutionally appropriate to categorize it under a certain head of power. This process is further explained below. 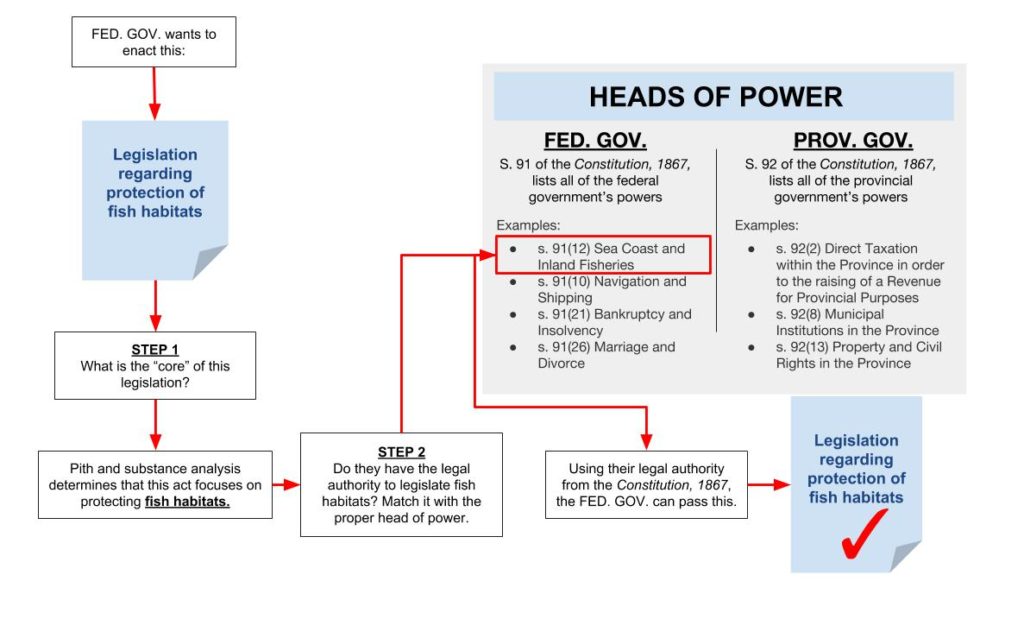 STEP 1: Determine the “Core” of the Legislation

Before you can “match” legislation to a head of power, the legislation must be properly “characterized”. In order words, we must determine what subject matter it is legislating or the act’s “core”/”essence”. This is what the courts call the “pith and substance” analysis, which is an important step, as legislation may touch on more than one subject matter.

For example, an act called “The Protecting Fish Habitats Act” may involve much more than protecting fish habitats. If the act involves taxing fisheries as a way to discourage some industry practices, the legislation now involves matters of regulating businesses and taxation – if the courts determine that either of these matters is the act’s “core”, rather than simply the protection of fish, the court may match the act to a head of power other than s. 91(12) Sea Coast and Inland Fisheries.

In examining the “essence” of a piece of legislation, the court will typically look at

STEP 2: “Matching” the Legislation to a Head of Power

The second step involves determining what head of power allows the government to pass the legislation in question – but what exactly do powers like “Sea Coast and Inland Fisheries” or “Criminal Law” mean? What kinds of legislation can be enacted under each of these heads of power? In many cases, the courts have developed “tests” to help them determine whether legislation fits the scope/’requirements” of that head of power. For example, if federally-proposed legislation passes the “test” of one of the federal government’s heads of power, they have the legal authority to enact that legislation.

Constitutional analyses can be especially difficult for matters that did not get drafted into the Constitution and assigned to a particular level of government, like the environment. As a result, both the province or federal government can pass legislation regarding the environment, but they must still do so using one of their existing heads of power.

6. What are main the arguments involved in this court case?

We have written summaries of the GOVSK’s factum4, the FEDGOV’s factum, and GOVSK’s reply factum, for a more in-depth exploration of their positions:

The main positions are below:

7. What provinces and organizations are involved in this reference case?

The Government of Saskatchewan is the party bringing the reference question and is challenging the GGPPA as unconstitutional.

The Government of Canada is the intervenor trying to enact the GGPPA.

The following provinces are intervening:

The following organizations are intervening7 (grouped by application):

The material on this website is not legal advice. SKAEL is an advocacy organization with the goal to provide legal information on environmental matters. The organization is made up of both lawyers and non-lawyers, both of whom contribute to this website. If you are experiencing a legal issue, please consult a licensed lawyer. Also feel free to send us a message. Although we cannot provide you legal advice, we may be able to assist you in another way.